At the 2010 Pulpfest, Will Murray announced he had inked a contract to produce seven new Doc Savage novels. In the 1990s, Murray published several Doc Savage novels for Bantam under the pseudonym Kenneth Robeson. He announced the new novels will…

At the 2010 Pulpfest author Will Murray spoke to a crowed room of Doc fans eager to hear news from the latest “Kenneth Robeson.” Murray, who wrote seven Doc adventures using materials from the Lester Dent archives, announced he had secured the rights to publish new Doc Savage novels. 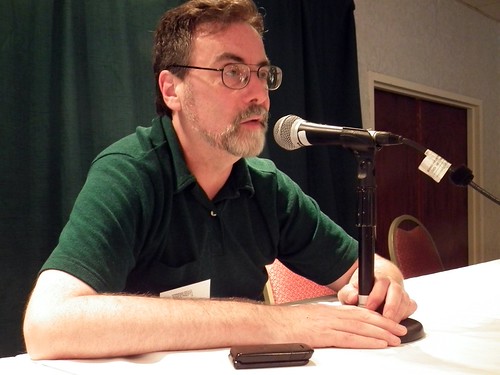 Will Murray at Pulpfest 2010
Photo CC by Chuck Welch

Murray explained Conde Nast (copyright holders for the Doc Savage character) had given him the right to publish seven new novels and reprint his seven published novels. Murray is in negotiation with a publishing house to produce the novels in paperback form — either in traditional or trade paperback size. Citing ongoing negotiations, Murray refrained from naming the publisher other than to state it wasn’t Anthony Tollin’s Sanctum Books. Tollin’s publishing house currently reprints the original Doc Savage novels from the 1930s and 40s.

The real reason I do this is to salvage the Lester Dent experience. — Will Murray

Murray unveiled a proposed cover for the first of the new novels, The Desert Demons. The cover used original art by Joe DeVito, cover artist for Murray’s seven novels published by Bantam. Murray explained the cover used a painting of Doc commissioned by Jack Juka and applicable to Murray’s story.

Murray explained the new novel was based on material unearthed during his research into Lester Dent’s papers. In 2005, Murray found a discarded Dent chapter that “introduced Doc in a whole different way.” Murray explained the chapter fit into a Doc novel he was considering, but would take it into a new direction.

Murray explained he wanted his new novels to be “over the top.” “We’re trying to take Doc somewhat out of the envelope,” Murray added. He said the stories would be similar to adventures such as those found in The Spook Legion or Repel.

Founded the Hidalgo Trading Company (1996) and The Flearun Discussion Group (1999). Chuck currently serves as Editor for the Bronze Gazette.